How the Pigskin Got Professional
By Christopher Mendez, Spring 2010 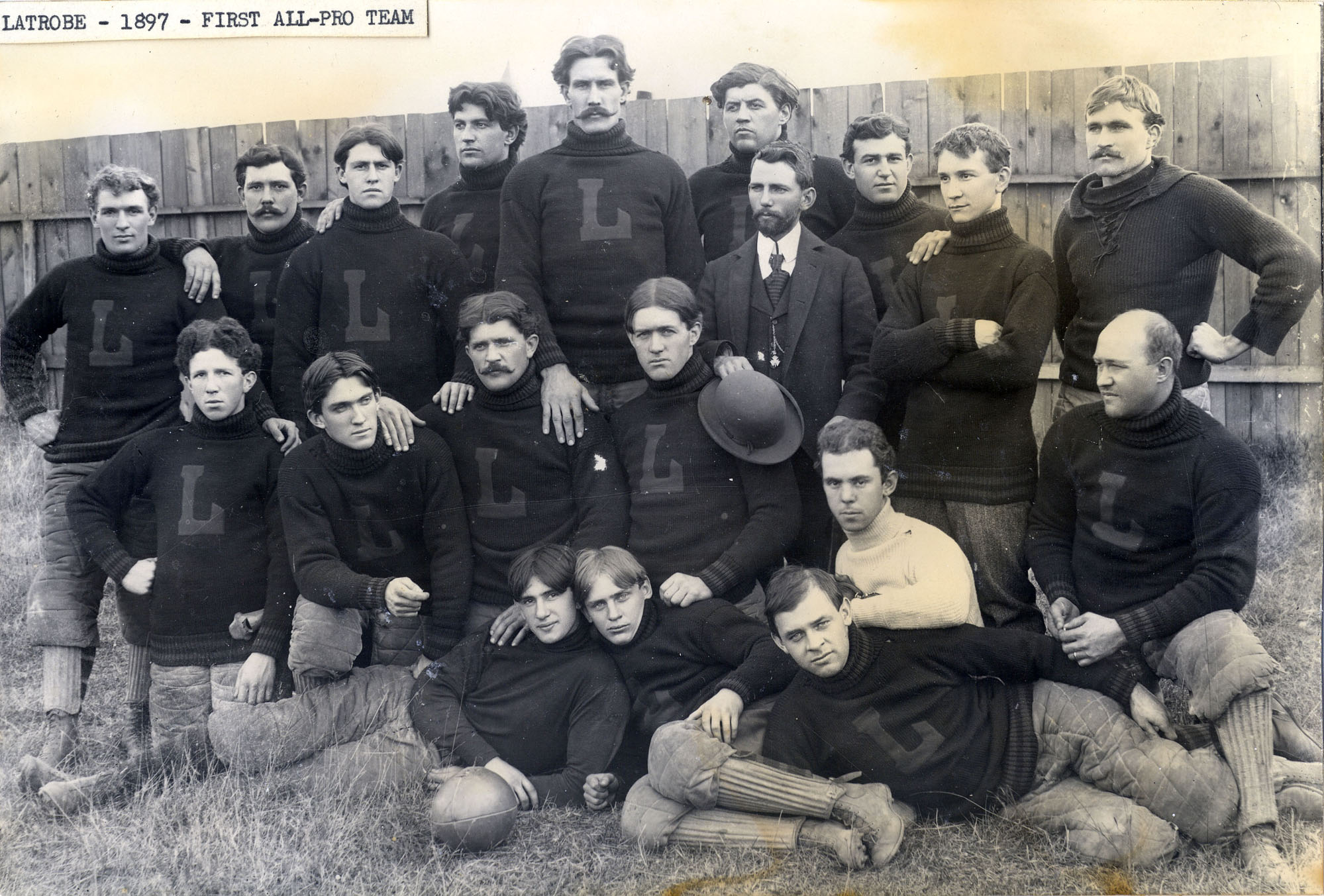 ennsylvania’s infatuation with football is long-lived. Calling oneself a football fan and cheering for a favorite team in a game where players exhibit extraordinary athleticism that is unparalleled by other sports has become a source of national pride. Despite the overwhelming popularity of football and the National Football League (NFL), most fans remain unaware of its origins. Where was professional football born? When did the first professional game take place? On November 12, 1892 Pittsburgh, Pennsylvania held the very first professional football game between the Pittsburgh Athletic Club and the Allegheny Athletic Club.

Prior to 1892, evidence of American football can be traced back to the years following the Civil War. At the time, the sport combined a mixture of soccer and rugby and was mainly played at the collegiate level. In 1869, two New Jersey rivals, Princeton and Rutgers Universities, staged the first competitive football game. The hosts, the Rutgers Scarlet Knights, were ultimately victorious, scoring six goals to four. Soon following, athletic clubs across the Northeast began assembling their own teams, commonly referred to as “club elevens.” An area that was particularly rich with these clubs was southwest Pennsylvania. Since then, Pennsylvania has seen 27 of its native football players make it into the Pro Football Hall of Fame, trailing Texas by one.

Teams quickly began competing with one another in hopes of becoming the area’s most celebrated club eleven. On October 11, 1890, the Allegheny Athletic Association (AAA), based in Allegheny City (now the North Side of Pittsburgh), played the Western University of Pennsylvania. The event marked southwest Pennsylvania’s first official game of football. Moreover, it marks the birth of a contemporary football powerhouse: Western University, now known as the University of Pittsburgh.

Paul McDonald
William Heffelfinger at Yale University, sometime between 1888 and 1891.

With competition fierce, another Pittsburgh-based club formed in 1891 – The East End Gymnasium Club. After a successful first season, the club’s reputation grew amongst football enthusiasts far and wide. Their growing fame allowed them to change their name to the Pittsburgh Athletic Club or PAC. Following their recent success, the PAC felt entitled to challenge the well-established Allegheny Athletic Club, or “The Three A’s”. As a result, the clubs scheduled an 1892 Columbus Day battle. The highly-anticipated match concluded with no victor with a tie score of 6-6. Following the stalemate, the clubs scheduled a rematch and both teams made changes to better themselves in preparation. With the clubs eager to win, they bent the rules in order to fill their rosters with the best players possible. This “revamping process” led directly to the first “professional” game.

Prior to their match, football was strictly an “amateur” sport. Players played for their dedication and love of the game, and playing for pay was highly frowned upon. To combat “play for pay” as it became known, an organization called the Amateur Athletic Union was created in order to monitor all club elevens and maintain the integrity of the game. Despite the organization, a closer look at football’s history reveals that the Union was fairly unsuccessful, and could do little to stop “play for pay.

The AAA and PAC implemented clever techniques to ensure compensation for their athletes without violating union rules. One technique widely used during the era was “double expense money.” Instead of awarding straight cash incentives, clubs would reward their top players with “gifts,” which they would in turn pawn for cash. This would often be done in the form of trophies or pocket watches. With this technique in mind, the AAA and PAC began scouting and offering incentives to athletes of interest for the rematch. The first team to make offers to players, the PAC, had a history of questionable behavior in the past. The club’s coach, William Kirschner, a well-respected football player at the time, held the title “coach,” despite the fact that he actively played in games. The attractive coaching salary he received was double expense money and a cover. Unfortunately for the PAC, Kirschner was later injured and they were forced to find another leader.

The PAC then scouted the well-known Chicago Athletic Association, known for their celebrated collegiate-trained players. Impressed with what they saw, the club offered famed guard William “Pudge” Heffelfinger $250 to participate in the highly anticipated rematch. Soon after, on October 30, the Pittsburgh Press got wind of the negotiations and reported that Heffelfinger and teammate Knowlton “Snake” Ames were offered money by the PAC.

Just as the PAC was looking for ways to strengthen its roster, the AAA was simultaneously speaking with Ben “Sport” Donnelly and Ed Malley, offering both “double expense money.” Once word spread, the club began to pursue Heffelfinger and Ames as well. They began by offering them $250 each for the game, but were unsuccessful. Ames refused to accept the cash incentive in fear of losing his amateur status while Heffelfinger was simply interested in more money. Pushing further, the AAA offered Heffelfinger $500, plus $25 for travel expenses, which he accepted.

Flickr
This expense sheet detailed the payment to Heffelfinger for play, marking the first professional game.

Weighing 205 pounds and standing 6’3’’, Heffelfinger was dubbed “Pudge” at an early age. He played for football legend Walter Camp at Yale University, where he played both offense and defense. During this time, the team went 54-2 and Heffelfinger received All-American honors in 1889, 1890, and 1891. Heffelfinger’s impact on the game remains intact as his creation – “the pulling guard,” whose job is to pull back from the line and run around the end attempting to block the defense in front of a running back – is still widely used. In the present, Heffelfinger is honored as the first major collegiate and professional football star.

As game day finally arrived, Heffelfinger, Donnelly, and Malley ran onto Allegheny Field touting AAA uniforms, in front of 3,000 screaming fans. When the PAC saw the players, they immediately accused the club of wrongdoing, claiming that they paid players, despite participating in similar negotiations themselves. The sides bickered substantially, but AAA manager O. D. Thompson maintained his and his club’s innocence. As negotiations subsided, the club managers agreed to play, however, the game was now only considered an exhibition and all corresponding bets were nullified. Despite the “positive” outcome, fans of both clubs were displeased. PAC fans were upset by AAA’s new Chicago additions, while AAA fans were angered by the elimination of betting.

Nevertheless the game proceeded. Due to the pre-game negotiations, the game was shortened to “two 30-minute halves, instead of 45 minutes.” During the first half, the legendary Heffelfinger terrorized the PAC offense, forced a fumble, and returned it for a touchdown, which at the time was 4 points. Unfortunately the shortened time was not enough and darkness overcame the field 18 minutes into the second half. As a result, Heffelfinger’s inspired play was the game’s only score. Thus, the AAA won 4-0 over their archrival. 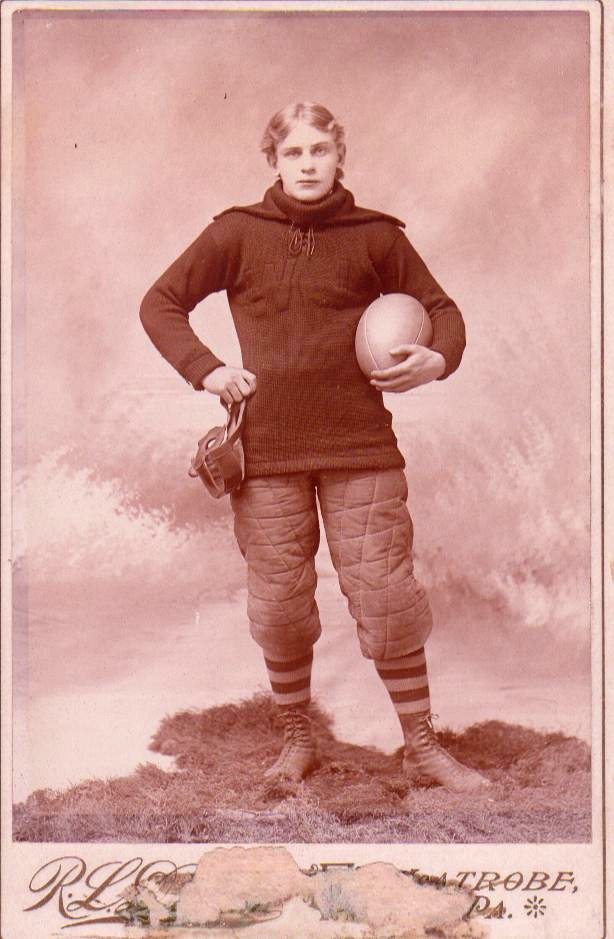 From the 1892 AAA/PAC rematch to the Pittsburgh Steelers’ 2009 Super Bowl victory, southwest Pennsylvania remains rich with football fans. Without the intensity within the area, professional football may never have achieved the mass appeal and allure it has today. Heffelfinger and the AAA’s have forever rooted the historic beginnings of professional football in Southwest Pennsylvania.